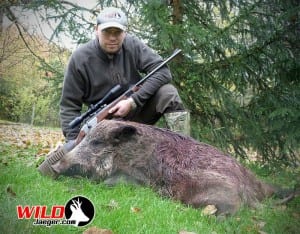 In November, an old friend invited me to hunt for wild boar and mouflon ram in northeast Hungary. The hunting territory was located in the heart of the mountains of Mátra and Bükk. Both mountains had a huge population of red deer, wild boar and mouflon. The first evening, we were sitting on a high seat at a “Kirrung” which is the feeding place (I don’t know the exact English word). With the last light, some pigs came in, and I managed to take a shot at a young Überlaeufer with my 300 Win. Mag. rifle. Surprisingly, it ran about 50 meters after the shot, even though the bullet went straight through the heart of the pig.

The next morning we waited till the sun came up, because the chance of meeting mouflon was much better, early in the morning. My friend sent me on a stalking route, that’s approximately 1.5 kilometers long and leads through beautiful landscape along the hillside. The sun was shining, the weather was sweet, but there was no game in sight after half an hour of stalking. Suddenly I heard some grunting behind me! I grabbed my rifle, but realized that it was just a little piglet. It ran like crazy past me. When I reached the end of the stalking route; I turned around and headed back to the meeting point.

I was just enjoying the landscape, when I spotted something moving underneath me. I took out my binos, and my heart began to beat faster as I saw a nice mouflon ram moving in line with me on the hillside. It was moving slowly, so I had enough time to judge the size of the horns. First, I thought it was not big enough. Then, I got my camera out and took some photos of the ram as it passed by. I took out my binos again to get a closer look, and decided to shoot. I dropped the camera, took out the rifle, aimed and shot.

The ram went down, but I had a bad feeling that the shot was high. Unfortunately I was right; the ram rolled down the hill about 30 meters, and got stuck near a tree. I was ready to shoot again, but suddenly the ram got up and ran away! I was shocked. I tried to take another shot, but the ram was already out of sight. I slowly climbed down to the place where the ram first laid down and saw the tracks. Slowly I followed the blood trail, and after 40 meters I spotted the ram lying about 30 meters away. He noticed me and stood up, but this time I was prepared and could take the shot. I saw that the shot was ok, but the ram was still running downhill! I followed the blood trail again. At the bottom of the hill, I found the ram lying dead. It was an exciting hunt. The real work started as we pulled the ram up the hill. We had to drag it back to the road where I took the first shot!

Hunting with my old friend in Hungary was a fantastic experience. I had the opportunity to see nature at its finest and harvest two great animals. If you ever get the chance to hunt Hungary I hope you do, it’s a real challenge.