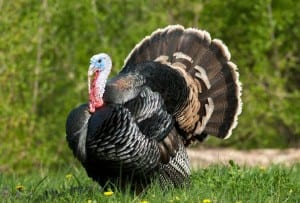 The 5 subspecies of wild turkey are the Eastern, Osceola, Rio Grande, Merriam’s, and the Gould’s. With each subspecies is variation in color, habitat, and behavior. The wild Turkey makes very unique sounds, including clucks, purrs, yelps, and gobbles. Toms have spurs on their legs and beards hanging from their chests. It is possible, but rare, to have a hen, with a small beard.

Future: Support is still needed to continue efforts to conserve wild turkeys the most predominant is the NWTF (National Wild Turkey Foundation)

Ammunition: A 3 to a 3 1/2 in shell is preferred for turkey hunting since it is very hard to get them into shotgun range once they feel the pressure of hunting in the area.

Archery: To harvest a wild turkey with a bow is very challenging but very rewarding. Any compound or recurve bow, crossbow where legal.

Notes: Calling is the most effective way to get a tom close enough for harvest. Various calls can be used, including box calls, diaphragms, and slate calls.